The Most Talked About Ads in Our Office 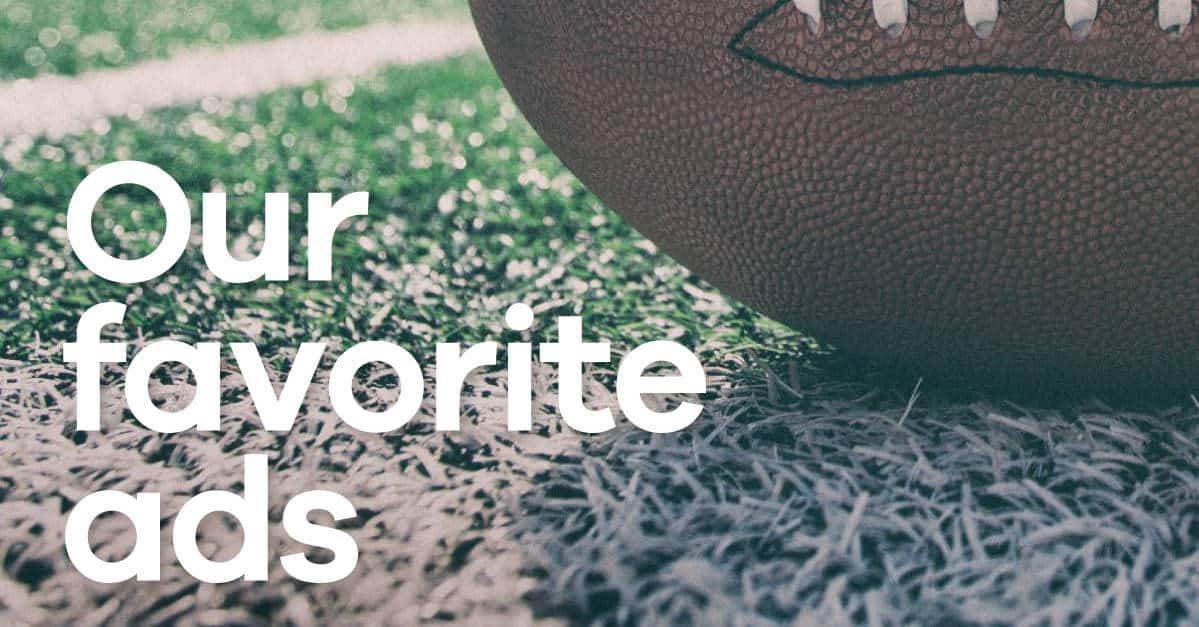 What a game. Great job Eagles!

Now for the ads. Our team broke down their most (and least) favorites that aired during last night’s game.

What were your most and least favorite ads?

The commercial that stuck with me the most was Budweiser’s “Stand by Me”.  With all the natural disasters this past year, it really hit home.
Stefanie Meyers, Staff Accountant

Loved: Tide ads. Super memorable and enjoyable.
Didn’t Love: Michelob Ultra. They did a lot to tease Chris Pratt’s presence in these ads, but the only one I remember was very bland.
Dan Giacomini, Marketing Director

Of the two I saw, I enjoyed the Danny Devito spot with him playing the red M&M. “He’s still short and bald” was the line that got me chuckling.
Dave Riley, Creative Director

My favorite ad of the night was the Doritos/Mountain Dew ad because is there really any better combination than Tyrion Lannister, Busta Rhymes and Morgan Freeman.
Mary Bonomo, Assistant Art Director

This is probably a dark-horse pick, but my favorite ad of this year’s Super Bowl was the Squarespace ad with Keanu Reeves. Typically, I’m looking for a Super Bowl commercial to make me laugh. The spots that have long, serious voiceovers are lost on me, probably because I’ve seen so many of them over the years. I also don’t love the corporate social responsibility-themed ads, because they always seem a bit contrived. So, this Squarespace ad was right in the sweet spot for me. It was short, memorable and funny. I’m also a big Keanu Reeves fan, so I’m sure that helped Squarespace’s cause, at least as far as I’m concerned.
Andrew Bevevino, Social Media and Public Relations Coordinator

All of the Tide spots were my favorite – that campaign as a whole was brilliant.

After seeing 2 or 3 Tide commercials last night and picking up on their campaign’s concept, we were all more engaged with the commercials wondering, “Is this going to be another Tide commercial too?” Each ad somehow had us thinking about Tide regardless of the actual content. Plus, David Harbour was the perfect choice for relevant, humorous talent.
Mandy Bly, Digital Project Manager

I definitely thought Tide was the big winner this year.

My top five ads were:

Thought the Dancing with Diet Coke Mango was a flop.

And for the record, I hate the trailers for scary movies.
Dick Shaner, Jr., Senior Vice President | Public Relations

Favorite – Bud water commercial.  I thought the ad was well thought out and portrayed the goodwill message they intended.
Least Fav – T-Mobile baby commercial because of its political undertone. Should be able to watch the SB without politics.
Tim Coppola, Chief Financial Officer | Chief Operating Officer

So often I like a lot of the spots, but I miss, or forget the main message or what the product was that was advertised. It may make me laugh, but what was the ad really selling?

As a communicator, I really liked the Doritos and Mountain Dew team up. It was really unexpected for two brands to join forces. It made the takeaway much easier to get—“hot” Doritos with a “cold” Mountain Dew. Simple and memorable.

And as a father of a child with disabilities, I found the Toyota amputee spot very uplifting. It wasn’t a space I thought Toyota would be in. Personally, I connected with them emotionally.

My favorite SB ad from last night’s game was from the NFL featuring Eli Manning and Odell Beckham, Jr. Their rendition of “Dirty Dancing” was hilarious! I’m looking forward to seeing what others thought of it, as well.
Pat Collins, Communications & Operations Coordinator

In terms of effectiveness, creativity and intrigue I have to go with Tourism Australia’s Crocodile Dundee Reboot as hands-down the best. Considering Paul Hogan originally starred in a Tourism Australia ad targeted for the U.S. in 1984 (two years before “Crocodile Dundee”) and the fact that this was so believable leading up to the Super Bowl (robust website, IMDB page, active hashtag, actual news stories) and especially halfway through the ad, it did its job in getting people’s attention – and thus thinking about Australia as a vacation option.

Here’s to hoping that the public’s disappointment that this wasn’t real will actually convince Hollywood to commit to this brilliant movie concept with Danny McBride.
John Jiloty, Vice President | Social Media and Content

The Toyota spot was so unique and left me wondering from the start what the ad was for. I think the ones that leave you guessing are strong ones. I also loved Toyota’s take on diversity. Very well done and unique.
Sarah Richheimer, Social Media and Public Relations Specialist

I loved E-Trade’s “This is Getting Old” spot. It combats a major challenge with comedy. Americans are not saving enough. More than 1/3 have no retirement savings at all. It’s a growing issue, and like the ad says, this is getting old. E-Trade attempts to tackle the issue with humor. It grabs people’s attention, and hopefully inspires them to start thinking about their retirement security.
John Mackowiak, Senior Public Relations Manager